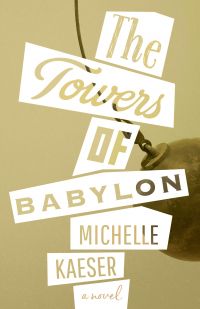 Embracing the anxieties of contemporary urban life, The Towers of Babylon tracks a group of hapless Millennials trying to find meaning in a world that consistently rejects them. What do you do when you have a graduate degree and are stuck working at a bagel shop? Or you’ve snagged a steady, middle-income job only to find it’s plunging you into a moral abyss? Or you’ve worked your way into the upper echelons of the finance sector, but are still (still!) somehow struggling to pull in enough to support the dependents that just keep popping up around you? What happens to your faith when the world that was promised to you is collapsing at your feet.

As the novel’s four narrators pinball around Toronto—where real estate prices are hyper-inflated, public infrastructure is crumbling, and climate change is bringing on killer heat and savage storms—they each try to do what’s right for themselves and for the world. Trouble is, none of them can agree on what right means.

There’s chronically unemployed and accidentally pregnant Joly; her best friend Louise, a billboard marketing genius in moral crisis; Joly’s boyfriend Ben, a communist/Anglican hybrid with a big heart and big hopes and a big reservoir of anger; and Yannick, Joly’s brother, a private equity hotshot, overworked and overburdened and trying to shake off an encroaching depression with brute will.

The Towers of Babylon looks at a generation struggling—professionally, personally, and spiritually—to carve out their place in a civilization that may well be inching toward decline.