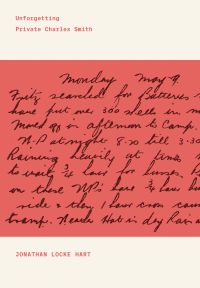 Private Charles Smith had been dead for close to a century when Jonathan Hart discovered the soldier’s small diary in the Baldwin Collection at the Toronto Public Library. The diary’s first entry was marked 28 June 1915. After some research, Hart discovered that Charles Smith was an Anglo-Canadian, born in Kent, and that this diary was almost all that remained of this forgotten man, who like so many soldiers from ordinary families had lost his life in the First World War. In reading the diary, Hart discovered a voice full of life, and the presence of a rhythm, a cadence that urged him to bring forth the poetry in Smith’s words. Unforgetting Private Charles Smith is the poetic setting of the words in Smith’s diary, work undertaken by Hart with the intention of remembering Smith’s life rather than commemorating his death.

Jonathan Locke Hart is a Canadian poet and professor at Shanghai Jiao Tong University. His recent work in comparative literature includes The Poetics of Otherness, a study of the literature of war.