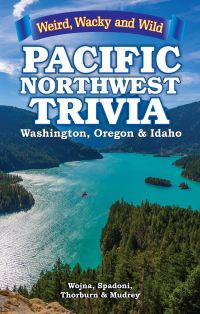 Pacific Northwest Trivia is a readable, entertaining potpourri of fascinating facts about a region of ecological diversity, captivating history, a progressive political culture with hints of separatism and colorful characters:
• The world’s largest strawberry shortcake, weighing 5700 pounds, is served to more than 15,000 people at the Lebanon Strawberry Festival in June
• Adam West, of Batman fame, was born in Walla Walla, Washington, and played the lead character in that campy TV series from 1966 to 1968
• Despite being a semi-arid to arid climate, summer in Idaho is known for its wildflower blooms, covering literally thousands of acres
• The site of the nation’s only fatal nuclear reactor meltdown is just one of the more than 50 nuclear reactors built at the national testing site near Idaho Falls
• Bertha Knight Landes (1868–1943), the nation’s first female mayor, served as Seattle’s mayor from 1926 to 1928
• The name for the city of Portland was settled by that most scientific of methods: a coin-toss.