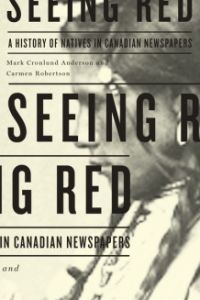 The first book to examine the role of Canada’s newspapers in perpetuating the myth of Native inferiority. Seeing Red is a groundbreaking study of how Canadian English-language newspapers have portrayed Aboriginal peoples from 1869 to the present day. It assesses a wide range of publications on topics that include the sale of Rupert’s Land, the signing of Treaty 3, the North-West Rebellion and Louis Riel, the death of Pauline Johnson, the outing of Grey Owl, the discussions surrounding Bill C-31, the “Bended Elbow” standoff at Kenora, Ontario, and the Oka Crisis. The authors uncover overwhelming evidence that the colonial imaginary not only thrives, but dominates depictions of Aboriginal peoples in mainstream newspapers. The colonial constructs ingrained in the news media perpetuate an imagined Native inferiority that contributes significantly to the marginalization of Indigenous people in Canada. That such imagery persists to this day suggests strongly that our country lives in denial, failing to live up to its cultural mosaic boosterism.

Mark Cronlund Anderson is the author of four books, including Pancho Villa’s Revolution by Headlines and Cowboy Imperialism and Hollywood Film, which won the 2010 Cawelti Prize for Best Book in American Culture. He is a professor of history at Luther College, University of Regina.

Carmen L. Robertson is mixed blood (Lakota/Scottish) scholar currently working on projects related to the art and mythology of Anishinaabe artist Norval Morrisseau. She is an associate professor of art history at University of Regina and also maintains an active curatorial practice.