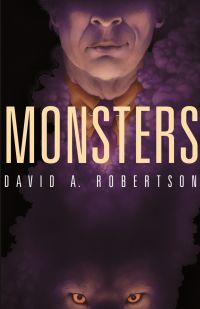 Cole Harper is struggling to settle into life in Wounded Sky First Nation. He may have stopped a serial killer but the trouble is far from over. A creature lurks in the shadows of Blackwood Forest, the health clinic is on lockdown by a mysterious organization, and long-held secrets threaten to bubble to the surface. Can Cole learn the truth about his father's death? Why won't Choch give him a straight answer? Where the heck is Jayne? Oh, and high school sucks.Monsters is the second novel in David A. Robertson's The Reckoner trilogy. It is the follow-up to Strangers.

David Alexander Robertson is an award-winning graphic novelist and writer who has long been an advocate for educating youth on Indigenous history and contemporary issues. He has created several graphic novels, including his newest series, Tales From Big Spirit, as well as the bestselling 7 Generations series. He was a contributor to the anthology Manitowapow: Aboriginal Writings from the Land of Water (2012) and is currently working on the upcoming novel, The Reckoner. His first novel, The Evolution of Alice, was published in fall 2014. David lives in Winnipeg with his wife and five children, where he works in the field of Indigenous education.